This product has been discontinued. Equivalent products from our current product range can be found here: (Discontinued entirely, no successor product) 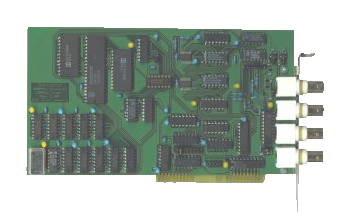 Request
This measuring card contains two timers connected in series and a counter. The counter has a signal and a gate input. It counts pulses on the signal input while the gate input is actice. The gate input can be enabled or activated by the computer.

The counters consist of two identical independent channels. Each channel can be triggerd by its trigger input or by the control software. The presence of a predefined signal edge on the trigger input triggers an output pulse with a programmable duration. The pulse starts and ends in sync with the clock signal, which guarantees a high reproducability even for the longest pulses.

The pulse duration and its stability are determined by an internal quartz oscillator. Both channels are internally coupled in order to generate pulses which are time-shifted with respect to the trigger signal. The trigger input of the first and the output of the second channel are connected to the BNC sockets of the measuring card. The polarity of the output signal can be switched. Additionally, the output of the second channel can be internally connected to the gate input of the counter.

Information on how to open the various file formats can be found here.